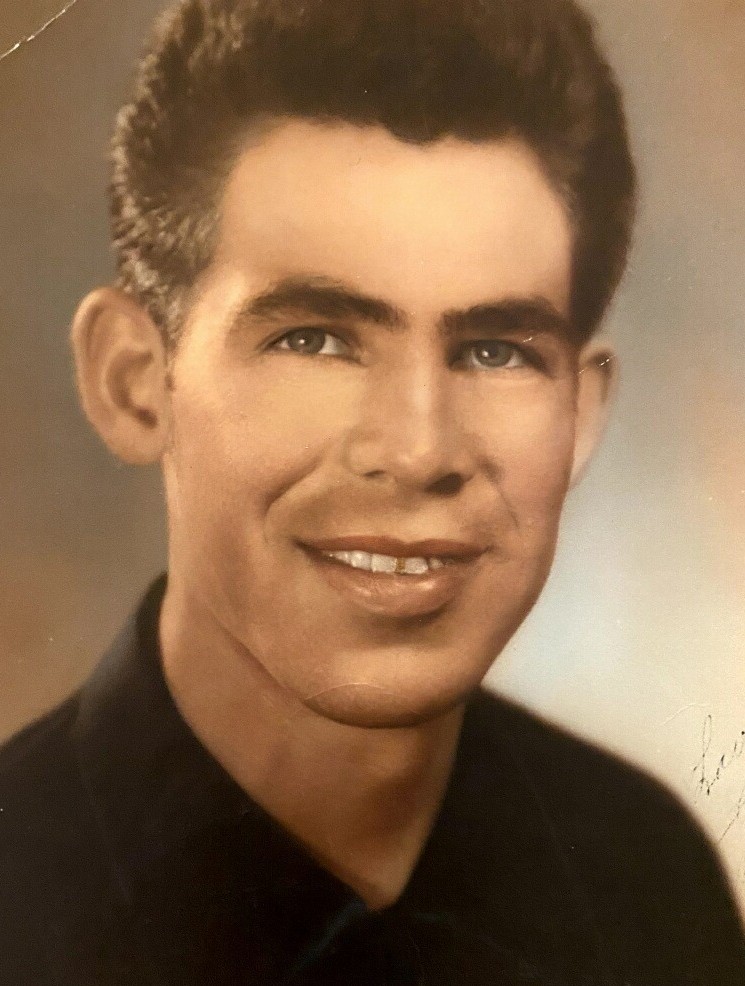 Obituary of William A. Sanchez

WILLIAM A. SANCHEZ “89” of Denver CO, Passed Away on December 16th, 2020. He fought Valiantly for several years against Advanced Stage Alzheimer’s Disease. Each day was a Victory for him and his family. That battle, recently aggravated by Corona Virus, & Pneumonia took his life shortly thereafter. He died at Lutheran Medical Center with his Sons at his bedside…

Bill met the Love of his Life, Virginia L. Martinez, (Lisa) from DelNorte, Colorado through his 1st Cousin: Maxine Herrera. They Married September 12th, 1954; He Joined the Navy and they moved to Long Beach, California. His Brother Dickie also joined the Navy a year later and they served together on the same ship in Long Beach.

Note of Interest: Bill & Lisa were both 1st Cousins to Maxine Herrera, yet were not related to one another until Marriage…

Bill learned the sport of Boxing at one of the Sparring Gyms in Monte Vista before joining the Navy. He became “Exceptionally Good” at it. So much so, that he continued this path in the Boxing Program on the Flag Ship Heavy Cruiser “USS Helena”. He worked his way up through the Amateur Ranks to become a Golden Gloves Champion.

Notes of Interest: While on a Transport Mission During the “Korean War” Bill boxed before President Ike Eisenhower… He Won that bout of Course. Also, while enlisted, his Academic Achievements earned him the rare opportunity to transfer to Annapolis Naval Academy. He respectfully declined the offer to stay with his Brother Dickie, who was also Serving and Boxing on the USS Helena.

When his Active-Duty time was served, He was Honorably Discharged from the Navy, and he returned home to his Wife Lisa to begin their lives together and raise their family. They were Blessed with four children in order of birth: Alberta Lynn, Mike Rosavel, William Lee, and Don Ricardo, Sanchez.

William jumped right back into the Boxing Game while he sought work as a Civilian. In a short time, he began a new Job at McDonnel-Douglas Corp. He still boxed and had become one of the Classiest Feather Weights in the Circuit.

All was going well, and Life was good! but as luck would have it, a few short years later he was stricken with Tuberculosis; forced to leave McDonnel-Douglas; and say goodbye to Boxing. Devastated by this turn of events, Bill & Lisa sent the Children to Denver, Colorado to stay with his Parents while he was commissioned to absolute bed rest at the Long Beach Sanitarium to heal. This encounter took one of his Lungs…

He was laid up for several months before showing any signs of improvement, but he was a Fighter, both in and out of the Ring and eventually things did turn around for him. When he finally felt strong enough to consider returning home, his Doctors informed him that Long Beach was not a good Climate for his condition, and he should consider relocating to a Drier Climate for optimal health.

Bill & Lisa decided a move to Denver, Colorado would be the best solution for them, as the climate was much drier there, and his Parents and Children were already there. They informed his Medical Team of their decision, and as soon as he had clearance from the Sanitarium, they made the move!

Bill faced the challenge of starting over again head on. He immediately hit the books earning his Engineering Degree at night while working in whatever capacity he could during the day. He applied himself conscientiously to his Goal and the years flew bye. Well, it paid off: His education landed him a position with the Colorado Department of Transportation, (CDOT) in 1963.

The position began in Grand Junction Colorado, which was good as they both had relatives there. Once again, he earned his way up through the ranks: Engineering Tech 1…, Engineering Tech 2…, after which he Re-located back to Denver and He & Lisa purchased their 1st Home…, Sr. Engineer…, Chief Engineer…, after which He & Lisa Purchased their 2nd Home…, after 30 years total with the Highway…, he retired as Chief Principal Engineer, (Inspector), Colorado Department of Transportation.

Bill was very much a Family Man. He & Lisa instilled the value of Family in each of their Children early on. The early years as he often recalled were filled with Family Events: Holidays, Birthdays, Reunions, Picnics, Barbeques, Camping, Fishing, Hunting; A day at the Swimming Pool; A night at the Drive-InTheater, and anything else that brought the Families together…The More, The Merrier!

Bill was also a Man of Faith, He believed in God; Accepted His Only Begotten Son Jesus Christ as his Personal Savior; Attended Church Regularly; and served for many years in the Church; He was sure of his Salvation and knew when his time here on Earth was through, he was ready to meet his Savior Face-to-Face and rejoin his Eternal Family in Heaven…

Due to widespread Covid-19 Restrictions, The Church Service will be limited to Twenty persons. They have been pre-selected and each will be an active participant in presenting a Beautiful Celebration of Williams Life.

Warwick Adventures will provide a Live Stream of the Church Service, and the Honor Ceremony  on Tuesday, January 12th at 11:00 AM and 1:00 PM respectively.  The link will be provided well before the services.  Thank you for all your Support and Prayers, and we'll see you in the Live Stream...

Share Your Memory of
William
Upload Your Memory View All Memories
Be the first to upload a memory!