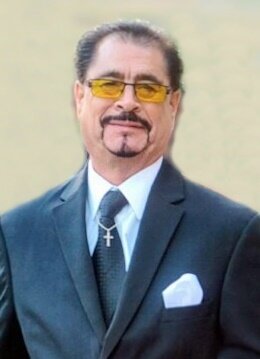 Randy Joe Martinez, 64, passed away peacefully in his sleep at home in Lakewood on November 13, 2021.

Randy was born April 22, 1957 in Denver to Andrew and Dolores Martinez joining six siblings. He grew up in Alamosa. He married Marcia Martinez (née Algien) August 27, 1983 in Denver with whom he had two children.

A devoted family man, he loved his mother and proudly proclaimed himself a “Mama’s boy.” He loved to entertain and enjoyed sharing his home with his large family during the holidays and large family events in general. He relished supporting his two sons in not only their athletic and school activities but all aspects of their lives. He never hesitated to express his pride in his boys and his seven grandchildren. His grandchildren brought him the most joy and sense of pride. He made memorable moments and developed special relationships with each of them. Forever a Marine, Randy served in the United States Marine Corps beginning in 1974 where he was stationed at Camp Pendleton near San Diego. He carried the patriotism, discipline, and attention to detail instilled in him by the Corps throughout his personal and professional life. The consummate salesman, Randy was born with the gift of gab which made a career in sales seem like second nature; which comes as no secret to anyone who met him. He built relationships and rapport with ease, in part by his passion for connecting people to the right products and his nature to connect with others. He began his sales career with Donsons Distribution in the wholesale foodservice industry where he enjoyed recognition and success in the industry for nearly 20 years before shifting to retail sales. He began his retail sales journey with Beds, Beds, Beds before moving to Mattress King/Mattress Firm where he became widely known as Mr. Black or The Sandman. His knowledge and experience in sales coupled with his ability to connect with clients and vendors alike led to even more success in the retail sales industry. Randy earned numerous accolades, awards, and recognition as a salesman, manager, and brand ambassador at both local and national levels with Mattress Firm where he proudly “put people to sleep” for 21 years. Randy retired from Mattress Firm in late October 2021. He enjoyed sports and shared that enthusiasm with his sons. He regularly played softball for company and league teams as well as golf. He loved all sports Denver or Colorado and spent a number of years rooting for the Buffs on Saturday and the Broncos on Sunday. He was an impassioned Broncos “Fanatic” for years, he was known to leave someone’s house abruptly or asking people to leave his house immediately following a Broncos defeat, before easing up; however, he remained a dedicated “normal” fan. He is survived by son Randy Martinez and his wife Anne; son, Aaron Martinez and his wife Selena; 7 grandchildren, Aaliyah, Jaelah, Elise, Audrina, Vayda, Allie, and Rocko; former wife, Marcia; 5 siblings, Andrew, Rose, Simon, Patrick, and Jerry; 1 aunt, Marcy and numerous nephews, nieces, cousins, and friends. He is preceded in death by his parents; and 1 brother, Lawrence. Memorial Service will be held at 11:00 AM Wednesday December 8, 2021 at Fort Logan National Cemetery, 4400 W. Kenyon Ave., Denver, CO 80236. The family will hold a celebration of Randy’s life at 11:30 AM that same day at VFW Post 9644, 2680 W. Hampden Ave., Sheridan, CO 80110.

Share Your Memory of
Randy
Upload Your Memory View All Memories
Be the first to upload a memory!