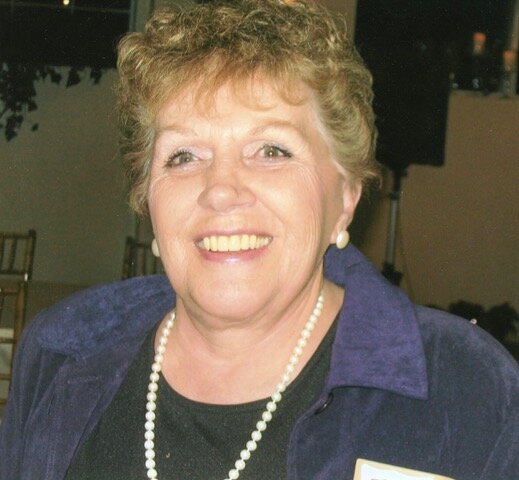 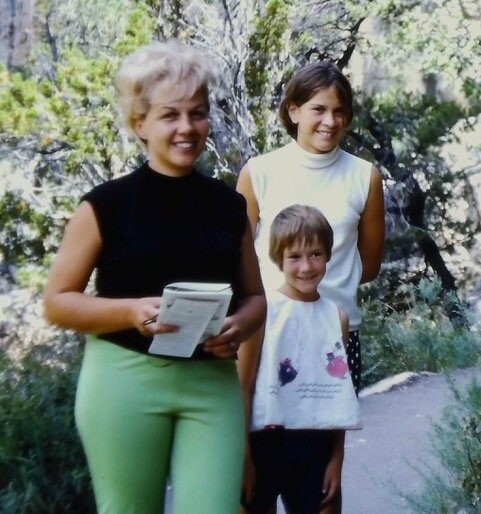 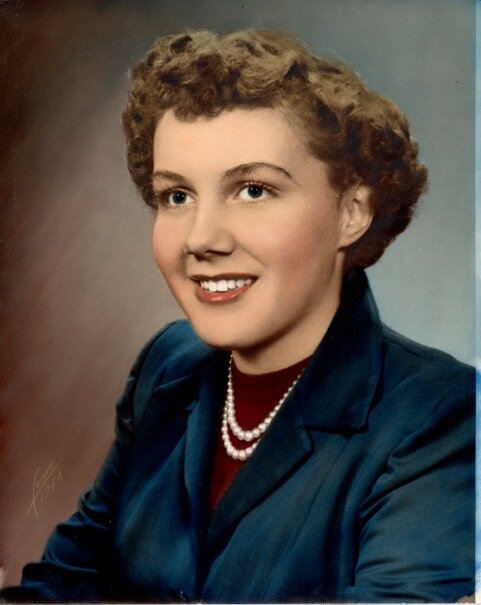 Those who knew Elaine well, know that capturing and telling her life story is not an easy task, causing us to ask, “When did you sleep?” She was a consummate DOER and a serial entrepreneur. She was very accomplished in many arenas, lived a big life, loved deeply, was a curious and adept researcher, an excellent trainer, hosted many in her home, was a strong proponent of hand-up – not hand-out, she was an explorer and adventurer who loved to travel. She lived out her pioneer spirit in nearly every activity she was involved in, from the early days of flying, to being on the ground floor of a new decorating trend for Spanish style furnishings, she jumped in early with the Internet and technologies, often teaching others, even younger than herself. From the outside she appeared to be fearless because she was rarely, if ever, stopped. She loved people but was comfortable in her own skin and preferred to be alone rather than spending time with those she did not respect. She was excellent at capturing and documenting the details of her exploits, but rarely looked back at them. She was ALWAYS looking and moving forward. Always asking, “Well, now that ‘X’ has happened, What’s next?” During her lifetime she visited 13 countries, went on 2 mission trips, started or participated in a minimum of 12 businesses. Even just prior to her passing, she repeatedly wanted to know: What is the Plan? What am I supposed to be doing? How long is this going to take? She wanted to get through whatever was holding her back and keeping her from moving forward with her next round of goals and objectives. She wanted to be able to get on with things, and she was not yet done with all of her plans.

Elaine grew up in farm country and loved dog and horses, originally living across the road from her grandparents. Her great grandparents had settled in Platte County NE as homesteaders after coming to America in the mid 1800’s from northern Germany. In her early teens the family moved to Lyons, NE and then to Macedonia IA where Elaine graduated in 1954, 1 of 18 students. She worked in Omaha and married the handsome and charismatic go-getter, Keith Frazier, Mar 1955. One year later-Patti was born. In 1960 the Frazier’s became the airport managers and Flight, Inc. FBO in Columbus NE. In Jul 1961 Terri was born. Flight, Inc. had good success and they were off to a strong start when tragically Keith was killed in Feb 1962 in an airplane accident at Jefferson County CO Airport. In 1963, Elaine moved her girls and George the dog to the Denver metro area and has since continued to call Denver and Lakewood area home.

Elaine purchased her first home in 1964, across the Weir Gulch from the Belmar (Bonfils) Mansion and Estates in Lakewood, doing so when women were not able to get home loans without co-signors or spouses, but she did it! In 1965 she moved to Las Vegas, NV to help friends with their FBO, Exec Air. Elaine flew around the US and Canada, promoting Exec Air as a new form of corporate business air travel support - known as “The fastest hose in the west!” After being at Exec Air less than 4 months, the 5’2” “blonde” aka “Shorty” met her soon to be 2nd husband, another go-getter - Denny Ashby. In less than 2 months they were married and shortly after their 2 week honeymoon were moving the family back to CO.

Elaine loved to travel, and she and Denny almost always took the whole family wherever they went. Before leaving Vegas, her girls got to see Disneyland, the Pacific Ocean and meet their new Ashby family in Phoenix. After returning to Lakewood, the family 4-wheeled, camped and fished nearly every summer weekend. In ‘69 family took a 4K+ mile trip up to the Tetons, Yellowstone and all the way back to the Pacific, meeting her brother Don’s family in Portland, then back home through the southwest.

In the late 60’s the Ashby’s began to dream and plan. They bought a new home in Lakewood. The idea of The Spanish Galleon, Ltd. was born after Elaine did significant research on design and decorating trends as well as import requirements. They would import from Spain, Mexico, and So America - their goal was to bring the fashion and décor conscious public a new horizon in ideas and furnishings.

In 1970, The Spanish Galleon opened its doors. The first year was at the Villa Italia Mall in Lakewood, then moving to W Alameda, they remodeled the building to add arches and a bell tower. Their imports included hand crafted wrought iron and blown glass, hand carved furniture from Mexico and Spain, Alpaca from So America, and lots and lots of pottery. The store promotions regularly included Mariachi bands and authentic Flamenco Dancers. The family took many buying trips to Nuevo Laredo MX. In 1972 the family went on a month-long buying trip to Europe. Again, the prodigious researcher Elaine planned the trip through Germany, Switzerland, Italy, France, and then to Spain. In Spain they strengthened buying relationships. Following the confluence of a number of events, the store closed in early 1979.

After the store closure Elaine fell back on her La Salle decorator training, by starting “Interiors by Elaine”. At that time, a prior store customer shared the vision of the Amway business with them. The two go-getters were back in the saddle and quickly became Direct Distributors and were moving on to higher levels. During that time Elaine also became a certified Color Analyst, doing beauty seminars and selling Amway’s Artistry makeup with her daughter Patti. Once again, the marketplace shifted.

Elaine went looking for alternatives. In 1985 Elaine passed her realtor exam and started working for Century 21 Professionals in Lakewood. In her first year, the short go-getter became a top producer in her office, an honor she held for most of her professional real estate career. She helped many family members purchase their homes. She became an office manager and was a key trainer, always willing to help others achieve their goals. When Coldwell Banker bought out Century 21, Elaine once again was asked to be an Assistant Manager and trainer, while still retaining top level performance at her office.

Throughout her life, married and widowed, she was always engaged with family and with helping others. Nearly every immediate and many extended family members lived with her at some point in time. Her home was often the location of very large family and friend gatherings. She was diligent about attending family reunions, weddings, funerals, anniversaries, and graduations. She was “just there” for others.

In the early 90’s Denny’s health began to fail, and she fought hard for his Vietnam benefits to help him through. Sadly, she was once again a widow in May 1994. It was in 2010 that she was finally successful in getting him added into the Vietnam service records as a casualty of war. She, Patti, Terri and her grandson Nick traveled to DC for the ceremony. Her brothers Dave & Loren were also in attendance.

In 1996, she along with her daughter Patti and her husband Mike, launched GeeX, Inc, a boutique Internet services company. Once again at the forefront of the marketplace, Elaine was teaching her colleagues, often much younger, about the use of technology in their real estate business. She was also an influence on her brother Loren to get involved in digital photography.  Elaine helped launch GeeX into web services for the Denver metro real estate offices and many other small businesses. Following the dot com bust in the late 90’s Elaine went back to focusing on real estate and her personal hobbies.

As one of her primary hobbies, Elaine picked up the genealogy mantel set forth by her parent’s 1970 trip to Germany. With the help of her parents and brothers, Elaine used her prolific research skills to build the genealogy database for the Hellbusch and Neemeyer clans, going back multiple generations into early German history. She also built the www.hellbusch.com website. In 2000, she, her siblings and their wives took a six-week trip to Germany to meet cousins and further research their history.

Ever eager to travel and flirting with retirement, she bought herself a Sprinter RV Class B motor home. She traveled to the northeast with her brother Donely, to see the fall colors and to visit their brother Dave & his wife Lorraine. She and a high school friend explored from Denver to Portland and back, for her brother’s 50th wedding anniversary. She stayed connected with her past by regularly attending her high school class reunions back in Macedonia and Carson IA. She took the RV to the Albuquerque balloon festival because she had never been before, and because she could. She traveled to Phoenix to see her life-long friend, Mary Ann. She traveled to Branson with friends and took the river boat ride.

Elaine’s took two mission trips. The 2002 Venezuelan trip was with her good friends Mary and Bill. Very gutsy, she traveled alone into and around Venezuela in the time frame right before the country fell to the dictator regime, and it was very dangerous. After her arrival, she met up with her mission team and took a bus ride up the steep narrow muddy roads of the Venezuelan mountains. Following the groups mission activities and their departure, Elaine stayed behind in Caracas, again on her own, hired herself a personal tour guide and explored “on her own” for another week. She took a boat ride up the river to Angel Falls and ate spit roasted chicken roasted on the excursion. The three-week, 2013 mission trip to Thailand was with her daughter Patti & her husband Mike and their church. In and around Chiangmai, she helped setup a computer lab for the Thai mountain people, and for the Barefoot Doctors training center. She was key in helping the students and adults learn and understand the technologies they had never seen before. Following the missions work, the three took an 18-hour train ride through the countryside of Thailand, ending up in Bangkok at midnight. They explored Bangkok for a week via all forms of transportation, except air: water taxi, car taxi, tuk-tuk, train, and on foot. Coming back from Thailand, the three had a one-day layover in Seoul South Korea. Ingenious Elaine was able to round up a private driver to ferry them through the city for the entire day and then drop them off at the airport. Mr. Son, the driver, was not a formal tour guide, but rather a professional private driver for corporate dignitaries, and once again, Elaine’s creativity and determination created a memorable experience.

The last decade of her life was spent working part-time on real estate, loving on family, and working on her projects, specifically her genealogy research. She missed having her dogs felt she couldn’t manage the care for them.

Light refreshments and dessert will be served. Interned with Dennis R Ashby, at Ft Logan National Cemetery, Denver Co - no service. Memorial to be placed at Roselawn Cemetery near Keith G Frazier, Columbus NE - no service

IN LIEU OF FLOWERS , the family is suggesting contributions to the Elaine Ashby Memorial Fund, which will be used to purchase either a tree or a park bench, to be placed in her honor, at the Heritage Lakewood Belmar Park. The heritage park is in the heart of Lakewood, near to her original duplex, her businesses, and views of her beloved Rocky Mountains. To contribute, send c/o Patti Barcroft, 2736 S Fenton St, Denver, CO 80227. Or contact daughters Patti or Terri to arrange Zell contributions.

Share Your Memory of
Elaine
Upload Your Memory View All Memories
Be the first to upload a memory!
Share A Memory